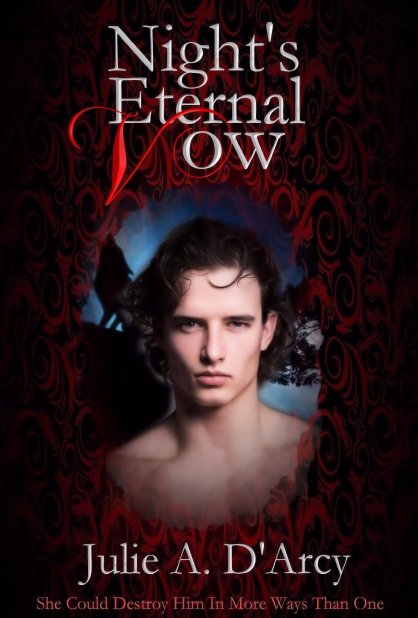 Lord Vincent D’Armano, a young nobleman, on leaving his mistress’s house in London one rainy cold night in the 1700’s is set upon by a sensual cunning, vampiress, Epatha, who is searching for a mate.

Many years later, after travelling to America and killing a war chief’s son, Vincent is cursed by a Cheyenne Shaman and has the ability to feel emotion restored. He escapes Epatha’s deadly embrace, although she still tracks him, and re-emerges into society decades later only to meet with the very woman that could destroy him, in more ways than one.

Detective Elara Gale hates Vampires after her childhood boyfriend is murdered and she sees a black cloaked figure fleeing the scene.

So when she discovers the dark stranger she is already more than half in love with is no other than the Vampire she is hunting, her loyalties are torn between her desire for Vincent’s touch and her duty to the law.

Lust, Romance, Magic and Murder combine to make Night’s Eternal Promise fast-paced, mission-oriented and filled with life and death issues. Vincent and Alara after battling Epatha in the present are cast back in time by an unusual hypnotist and an arrest gone wrong, and faced with a struggle to stop the Vampiress from making Vincent a vampire, and to save his mortal soul.

She ordered a margarita and settled back to observe the crowd. Twenties to thirties, they fit the profile of the usual night-clubber in their glitzy body hugging clothes.

He was dressed totally in black. Boots, long leather coat, open and pushed back to reveal a black shirt and dark pants. Hair, raven black, and short, and she knew he was looking.

It was not conceit, or in any way related to the fact she thought herself attractive to men. If anything, she was too wiry and her chest too flat. It was the strange tingly feeling that persisted in the pit of her stomach.

She turned her gaze from him and pushed through the noisy crowd to fetch another drink.

“I’ve been watching you all night. Wanna dance?” A lanky well-oiled male in a bright blue shirt, hip hugging black pants and a multitude of gold chains, blocked her path. She winced as his body odor invaded her nose and throat.

“No thanks, I don’t dance.” She made to step to the side, but his hand clamped down on her arm. “I think you do.” His tone was terse. “I think you would dance real fine with a body like yours.”

“You heard the lady. She does not dance.”

He stood behind her assailant, his hand resting on his shoulder. Alara had never heard a voice like it, rich like caramel, deep as the ocean, and smooth. He was at least a head taller than Mr. Oily, and his eyes peered right into hers, seeking her soul, stroking chords, which had not been touched for a decade. With eyes almost as black as his hair, he made her feel like someone of worth, not just a piece of ass in a tight skirt.

But he was definitely not her type.

Oily man’s face darkened, his mouth opened and he swung to see who had him, but his words caught in his throat and he stumbled over them. “I’m…ah, I’m sorry, buddy. Didn’t realize she was yours.”

“I am certain the lady is her own person, but that gives you no excuse to accost her.”

“No. No, of course not. Sorry.” The man shifted his gaze, and ran a hand over the back of his neck.

“It is not I to whom you should apologize.”

“Sorry,” he grumbled barely audible before making a hasty retreat into the crowd.

“I could have taken care of myself.” Alara raised her chin as her savior studied her. She came barely to his shoulder.

He turned in the direction of the table he had occupied, and her hand shot out.

“Wait.” She gripped his arm. Hard, muscular, beneath his coat sleeve.

What was she doing? He was not her type at all, but she knew she didn’t want him to leave. Not yet anyway.

“Yes?” He stopped, but didn’t look back.

“Can I buy you a drink?” She cringed. Did she sound desperate? She saw him stiffen. “In thanks for saving me.”

He turned, slowly and her hand fell away. What were those earlier thoughts? That he was not her sort of man. Was she insane? He was every woman’s sort of man. She could feel his body reaching out to her. She had heard of animal magnetism, but… Not even with Ice had she experienced this pull, and she had loved him. Dammit! This was almost palatable, powerful. She had to run. Put one foot in front of the other and turn away. Run now!

“One drink?” She forced a smile. “Just to say thank you.” How weak could one woman be?

His eyes were dark, brooding. Why didn’t he speak? What was he thinking?

“There is no need. I saw you were in trouble. I helped.”

“There is every need.” What was it about this man that kept her talking, saying things she would never say to another? She was forced to work in a male dominated profession, but always she stood on the outside, looking in, never getting close, never wanting to be close. She had loved one man. He had died. Left her — she would not be hurt like that again. She knew she should leave, but… “Please, I insist.”

He frowned and glanced away. She thought for a moment he’d refuse.

“Would you sit with me at my table?” He asked, looking back at her.

Alara swallowed hard, mesmerized by his voice. Deep, soft, yet strangely compelling, as were his eyes. Fathomless black eyes that seemed old beyond their years. Eyes that seemed to look into her and through her at the same time. As they were now.

“I’ll get the drinks,” she said too fast. “You do drink, don’t you? I noticed that there were no empty glasses on your table.” She blushed and glanced into the crowd. Blushed, her, a cop. She could feel the heat still suffusing her cheeks. She had never blushed in her life, and now he would know she had been watching him.

“A red wine will suffice. Do you need help?”

“No…I can manage.” Quickly, before he could change his mind, she pushed through the crowd toward the bar. What a fool he must think her.

Such a naive, inexperienced fool.

She reached the bar and after what seemed forever, finally placed her order. He was sitting in the shadows again. She caught a glimpse of him as she slowly maneuvered her way back through the room, and although the dance floor was packed she did not spill a drop. It was as if she was being lead safely along and no one could touch her. Like a fly to a spider, but the most irksome part of it was, she was walking into a web of her own making. 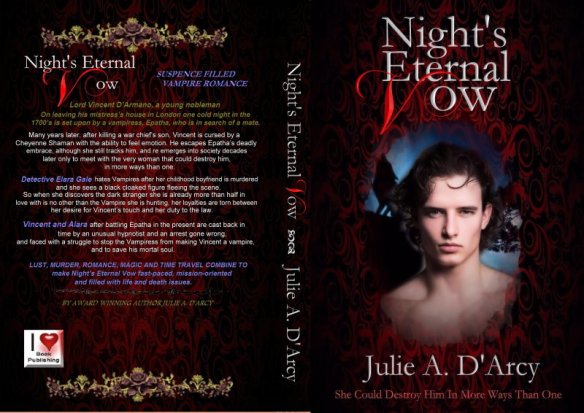 Adventures & Travels Audiobooks A Whisper on the Wind Book Updates Elven Magick General Musings Guardians of the Underworld My Poetry Night's Eternal Vow Silverdawn Spellbound The Dragon and the Rose The Shape of Destiny The Tarlisian Sagas Time of the Wolf Uncategorized Whisper of Yesterday Writing News Writing Tips
Loading Comments...
%d bloggers like this: